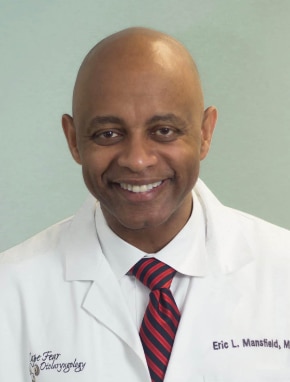 Dr. Mansfield was born in Louisiana, but grew up in Columbus, Georgia. He attended Howard University in Washington, D.C. and received his undergraduate degree in Chemistry.

He also attended Morehouse School of Medicine located in Atlanta, Georgia where he obtained his Doctor of Medicine in 1991. While at Morehouse, Dr. Mansfield received the Family Practice Student Award. He then relocated to New Orleans, Louisiana to attend Surgical Residency at Tulane University School of Medicine from 1991-1993. Dr. Mansfield was awarded the Teaching Resident of the Year by the Department of Surgery, OWL Club Outstanding Resident Award, and Intern of the Year for his work between 1991-1992.

Dr. Mansfield then completed his Otolaryngology residency from 1993-1996. He acted as Chief Resident for the Tulane School of Medicine’s Ear, Nose, and Throat program from 1996 to 1997. Dr. Mansfield became board certified by the American Board of Otolaryngology—Head and Neck Surgery in 1998.

If you are experiencing a medical emergency, please call 911.

Our friendly doctors are here and ready to help you. Call or fill out the form to schedule an appointment today